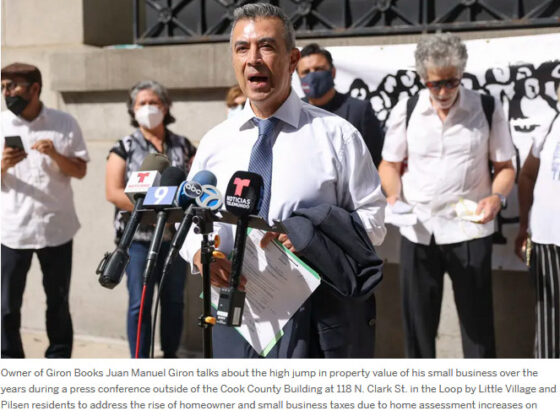 Since the property tax assessments for West Chicago Township, which includes the neighborhood of Pilsen, came out a few weeks ago, my ward office has been flooded with constituents who got dramatic increases in their assessments. Some are residential property owners, and some own commercial properties, but the common denominator is fear and suspicion that this is yet another way that our community will be gentrified.

And the initial numbers support their fears: 58% of residential owners and 93% of commercial properties saw increases in their assessments. While assessment increases don’t translate into 1-for-1 tax increases, the writing is on the wall and people rightly know that their taxes are going up.

When Cook County Assessor Fritz Kaegi promised property tax reform, this isn’t what we thought he meant. When he spoke about shifting the burden to commercial properties to give residential properties relief, we didn’t think the commercial properties seeing big increases would include local bookstores, restaurants and neighborhood shops. We thought they would be downtown skyscrapers and big developments. These neighborhood stores are often owned by longtime residents and are part of the social fabric of communities across Chicago. They can’t withstand more tax increases (in some cases up to 300% over the prior assessment), especially now in the uncertain times of the pandemic.

Residential owners, too, are seeing whopping increases, and if they are not corrected by the Assessor’s Office or lowered by the Board of Review on appeal, communities like Pilsen will change overnight as people who’ve maintained their properties for decades are forced to sell and move elsewhere. This would be a terrible and avoidable disaster.

We need real property tax reform from Assessor Kaegi and legislators in Springfield. We need the assessor to correct his errors, reexamine his methods and prove that they hold water. Pilsen is used to real estate speculators, but speculation has no place in formulating assessments, and increases of 100%, 200% and 300% smack of it.

We need property tax exemptions for property owners who rent units to long-time tenants, which helps keep people in their homes, preserve communities and avoid displacement. That’s why my office has proposed this idea as the Neighborhood Preservation Exemption to the assessor’s office and plan on advocating for it in Springfield. Currently, exemptions only exist for seniors and people with disabilities and too often don’t provide enough relief.

But we can’t stop there. Illinois needs to fundamentally change the way we fund our schools and other public services like libraries and public safety. As long as the bulk of that revenue comes from property taxes instead of income taxes, we have to look at other ways of creating equity through tools like assessment caps that would prevent such large increases in back-to-back assessment periods.

Bottom line: we can’t let property taxes be another tool of gentrification. That’s not real reform.