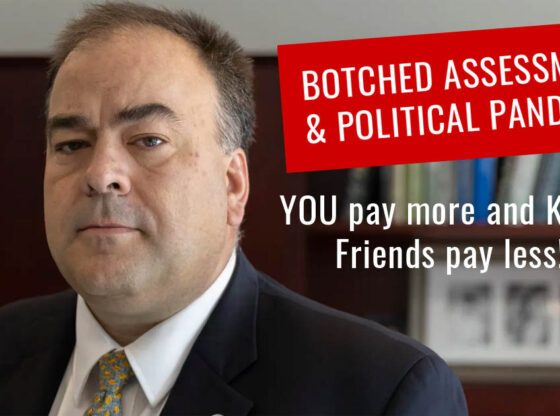 “The Cook County assessor cut values based on jobs he thought neighborhoods would lose due to the pandemic. It was a wild miscalculation that worked out well for some, including Mayor Lori Lightfoot, not so well for residents of a poor South Side neighborhood.”

When the COVID-19 pandemic hit, Cook County Assessor Fritz Kaegi decided to give homeowners a break based on his office’s unusual effort to estimate pandemic-related job losses and use those calculations to lower property assessments.

It turned out to be a wild miscalculation that worked out well for some, including Mayor Lori Lightfoot. The property tax bill on her home in Logan Square fell after Kaegi cut her property assessment in the booming neighborhood by 11%, a Chicago Sun-Times analysis has found.

But it didn’t work out so well for homeowners in some parts of Cook County, like Greater Grand Crossing, the poor South Side neighborhood that Kaegi decided would likely face the same level of pandemic-related unemployment as Winnetka. Those South Side homeowners ended up seeing small increases in their taxes.

Unemployment projections aren’t the sort of math his agency ever did before. But Kaegi says he decided he needed to do something when it became clear within weeks of the March 2020 state-ordered shutdown in response to the pandemic that home values in Chicago and the suburbs were falling.

So that spring Kaegi had his staff recalculate the values placed by his agency on all 1.5 million homes in Cook County, cutting each of those assessments by a median of 10%.

That didn’t mean everyone would end up paying less in taxes. Government taxing bodies still needed the same money to operate. So the amount of property taxes collected countywide wouldn’t change.

But Kaegi’s move affected every tax bill, resulting in lower tax bills for some homeowners, higher ones for others — and higher tax bills for most commercial buildings even though businesses were hard-hit by the pandemic, too.

Kaegi says that’s because commercial properties hadn’t been paying enough property taxes — which fund schools, police and other government services — because they’d been under-assessed by predecessors holding his office.

A few commercial properties did get one of Kaegi’s COVID property assessment breaks. Those included cuts that resulted in lower taxes for Wrigley Field, Arlington International Racecourse and many hotels. Others — among them Willis Tower — ended up with big tax increases.

Kaegi’s method
Instead of relying on sale prices to determine the value of residential property, as assessors across Illinois always do, Kaegi came up with his own neighborhood-by-neighborhood projections of unemployment, reasoning that job losses from businesses shutting down as a result of the pandemic would cause home values to plummet.

So, in April 2020, Kaegi’s chief data officer devised a computer program, using data from the U.S. Census Bureau and the Federal Reserve, to predict how many people would lose their jobs in each Cook County neighborhood and how that unemployment was likely to affect the values of homes, condos and small apartment buildings.

He estimated the unemployment rate in every neighborhood would go up by at least 8%, and as much as 16%. His office then cut its assessment on most residential properties by somewhere between 7.5% and 15.4%.

y the time homeowners got their tax bills in early 2021, housing prices already had rebounded. In fact, they had skyrocketed past pre-pandemic values as people rushed to buy more spacious homes in outlying city neighborhoods and in the suburbs.

But Kaegi’s COVID cuts — the likes of which weren’t seen anywhere else in the country — already were locked in.

“They took a gamble, and the gamble didn’t turn out as they expected,” says Laurence Msall, president of the Civic Federation, which monitors government finances.

Beyond that, Msall says, “A lot of the relief they gave was uneven and not where it was needed.”

Kaegi’s staff couldn’t provide the data to show how each homeowner’s COVID reduction was calculated.

Mystery calculations
Just how much COVID relief each homeowner got from Kaegi is a mystery.

The COVID break wasn’t spelled out on the property tax bills that were paid last October.

Nor does it appear on any county tax websites, though other tax breaks do, including the homeowner’s exemption.

The Cook County treasurer’s office — the government body that mails out property tax bills — says it doesn’t know how much each homeowner’s bill was affected.

Lawyers who handle property tax appeals say they have been unable to figure out how Kaegi calculated the assessment reductions or how much that might have saved a homeowner.

Kaegi sent letters advising homeowners he was reducing their assessments because of COVID. But he didn’t say by how much.

The assessor’s website shows the average COVID break in each neighborhood. But it doesn’t show how much individual homes’ assessments were reduced.

‘We guessed it wrong’
Kaegi’s former data chief Robert Ross, who quit last year, says the computer program he created set the line of “winners and losers” at 10%: Your property taxes went down only if Kaegi lowered your home’s assessment by 10% or more, according to Ross. Otherwise, a lower assessment of less than that much meant you still ended up paying more compared to the year before, he says.

In a May 2020 memo to Kaegi and other top officials in the assessor’s office recommending how to make the COVID breaks happen, Ross pointed out, “While it is outside the purview of the assessor to change assessments in response to factors other than changes in fair-market values, it is nevertheless interesting to consider such reductions in the context of underlying demographic factors.”

It soon became clear that the agency was wrong in predicting the effects unemployment would have on many neighborhoods, particularly those where home values soared.

“We guessed it wrong, which means some people won and some people lost,” says Ross, who since has been discussing the COVID breaks with Kari Steele, who’s running against Kaegi in the June Democratic primary.

Some still have break
For Chicago homeowners, Kaegi eliminated his COVID assessment reductions after one year because he was required by law to reassess every property in the city in 2021.

But he’s letting north suburban homeowners keep their COVID breaks for a second year as his staff works this year on reassessing all suburban properties north of Oak Park.

And all suburban homeowners from Oak Park south get to keep their COVID breaks until the assessor’s staff reassesses their communities in 2023.

That’s left some, including Msall and some county officials and property tax lawyers, wondering why Kaegi isn’t doing away with his COVID assessment breaks the same way he created them — all at once.

“You manipulated the system for everybody in one year, but you’re rolling it back over three years,” says Msall, who has been critical of some of Kaegi’s past proposals.

Kaegi says his office can’t handle reassessing the entire county in one year and that the law doesn’t allow him to increase assessments for homeowners except as part of a broader reassessment.

Kaegi was supposed to have set all Cook County property values for the first year of the pandemic on Jan. 1, 2020. But he says the disaster proclamation Gov. J.B. Pritzker issued March 12, 2020, gave him authority that year to reduce property values after the deadline.

His office appears to have discussed the COVID breaks with the Cook County state’s attorney’s office, which says it produced two pages for him it says are confidential, protected by attorney-client privilege.

Kaegi spokesman Scott Smith says the communication wasn’t a legal opinion but that the assessor would not waive privilege to release it.

How some were affected
Based on a database Kaegi’s office provided of his 2020 assessments for all 1.8 million properties in Cook County, here are some examples of how he applied his COVID assessment reductions:

– Like many of her neighbors in Logan Square, Lightfoot’s assessment went down 11%, which cut the property tax bill on her single-family home by $135 — to $9,272.

Most of her neighbors’ bills also went down — with the exceptions of three large apartment buildings that got no COVID relief because each one has more than six apartments. Their tax bills went up by as much as several thousand dollars.

“It is our expectation that the mayor’s property tax assessment was treated the same as every other Cook County taxpayer,” Lightfoot spokesman Cesar Rodriguez says.

Smith says the apartment buildings near Lightfoot’s home didn’t get any COVID breaks because larger “apartment buildings in Chicago were significantly under-assessed in 2018 under Assessor Joe Berrios, and therefore most did not receive additional COVID reductions.”

On the Gold Coast, Kaegi gave an 8% assessment cut to Pritzker’s 20,000-square-foot mansion as well as the six-bedroom house he owns next door — that’s the house that got $330,000 in breaks from Berrios because the toilets had been removed during stalled renovations. Despite Kaegi’s COVID assessment cuts, the property taxes on Pritzker’s two homes went up by a combined $9,367 last year — to $475,759.

A Pritzker spokeswoman says the governor didn’t know he got any COVID break because his taxes went up and because, like other homeowners, he didn’t apply for such a break.

Pritzker’s COVID adjustment was lower than those given to wealthy homeowners on the North Shore because “these calculated employment effects were less drastic in the Gold Coast neighborhood than in Winnetka,“ Smith says, referring to Kaegi’s unemployment predictions.

– Another of Cook County’s richest residents, Arie Steven Crown, got a 10% assessment cut on his $29 million mansion in Winnetka, which has the largest residential property tax bill in the county.

After Kaegi’s assessment cut, Crown’s tax bill went down by $9,683 last year, to $665,803, though the assessor says some of the savings came from Winnetka’s public schools cutting the amount of money they sought from taxpayers.

One of Chicago’s richest families for generations, the Crown name appears on the towering water fountains in Millennium Park and the performing arts theater at McCormick Place.

– Kaegi gave smaller COVID breaks to modest homes in neighborhoods like Grand Crossing, where a 1,100-square-foot bungalow near 74th Street and Perry Avenue saw its assessment cut by 8%, but its tax bill went up $50, to $1,970.

– Kaegi gave former Illinois House Speaker Michael Madigan and his West Lawn neighbors an 11% cut in their assessments. But the tax bill on Madigan’s side lot rose, so Kaegi’s cuts saved Madigan about $20.

Madigan couldn’t be reached. He heads the law firm of Madigan & Getzendanner, which handles property tax appeals for many downtown buildings that Kaegi says were unfairly under-assessed by Berrios.

– Kaegi gave 12% assessment cuts to Ald. Edward M. Burke (14th) and his neighbors in West Elsdon. That saved the alderman and his wife Anne Burke, chief justice of the Illinois Supreme Court, $423. They paid $15,625.

The Willis Tower’s tax bill rose nearly 11% last year even though the building had its own COVID issues, including new restaurants that didn’t open, closing its observation deck and a drastic decline in daily visitors from 10,0000 to fewer than 1,000.

In Rosemont, the Fashion Outlets of Chicago shut down for 82 days, but its property tax bill still rose 22% — up $2.8 million, to $15.2 million. This came after Kaegi gave the mall some COVID assessments breaks, and the Board of Review corrected an error in measuring its square footage that also lowered the assessment.

Lawyer: Kaegi’s motive was reelection
In the assessment appeal, the mall’s attorney, Patrick McEnerney, accused Kaegi of doling out COVID breaks to curry favor with voters as he seeks reelection.

“The assessor is slashing residential values predicated on ‘COVID-19 relief’ without a shred of evidence regarding any value decline in residential markets,” McEnerney wrote. “These overt and obvious efforts to pander to voters/homeowners are being pursued and implemented — all at the expense of commercial real estate owners.”

Kaegi says that trying to give homeowners a break was the right thing to do. He says that, though “we didn’t have all the data that we would have liked, we had enough to make a good decision” and that the aim was to come up with assessments that “were as close to being a good snapshot as we could with the data that we had.”