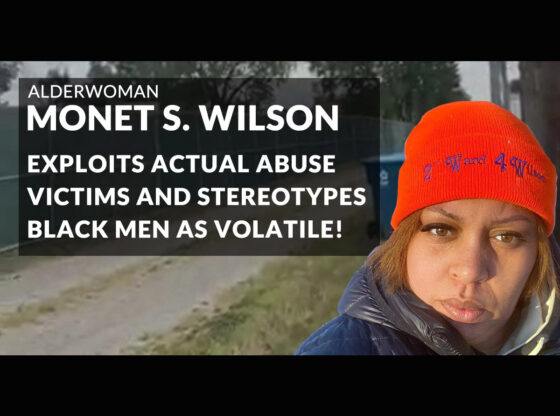 Alderwoman and now candidate for higher office, Monet S Wilson showed a craven desire to win an election by lying about her opponent. In the process, she minimized actual victims of abuse and furthered an unfortunate stereotype about black men.

On her official and campaign Facebook accounts, Wilson distributed graphics accusing Thaddeus Jones of abusing women. Her specific charges are utterly without merit. Her graphic falsely accuses Jones of denying her ability to speak at a council meeting, the wild accusation that he had an affair with Clerk Figgs and sexually abused her. Wilson also offers the equally specious claim that personnel decisions involving the library were made to target women. The front of the graphic shows depictions of women who are victims of physical abuse.

Clerk Figgs signaled her intention to run for higher office and contracted a messaging firm who helped construct the false narrative around Jones. As a political opponent, Figgs has been verbalizing utterly meritless accusations ever since. Falsely accusing someone of sexual harassment is defamatory and Figgs would be wise hire an attorney to defend her.

Towards her larger “thesis” accusing Jones of being against women, Wilson left out the fact that he supported her candidacy for Alderwoman. That does not matter to her now that she wants a higher office too.

Hyperbole is not unusual in campaigning, but what she is doing here is unique. She is lying at the expense of actual victims of sexual and physical abuse. Both are a serious and unfortunate matters in our society. When someone such as Wilson attempts to falsely paint herself as a victim, she minimizes the issue and makes it less likely an actual victim would feel comfortable coming forward.

There is also a racist stereotype about black men that Wilson’s disparaging graphic advances. She is furthering the narrative that black men are volatile and out of control. This has unfortunately long been used as a justification for violence against black men and continues.

On her Facebook page, Wilson stated, “No person, should have to deal with abuse of any kind. Illinois will never be what it should be because we keep electing people who do not mean people well.”

Wilson would do well to hold up a mirror as she offers such a screed. She is a candidate for office who is willing to advance lies, paint herself as a victim making real victims pay the price as a result, and advance a racist stereotype to advance her personal agenda.

The damage here is being done by Wilson herself and she hopes you don’t know any better.