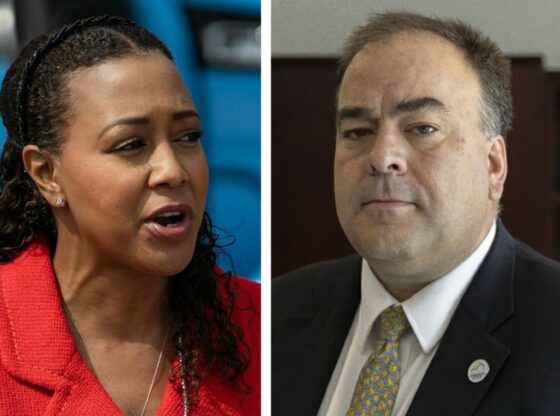 One of the biggest campaign races in Cook County ratcheted up Wednesday as Kari Steele, the top challenger to first-term incumbent Cook County Assessor Fritz Kaegi, received a $1 million contribution from a political fund backed by the influential operating engineers union.

The contribution from the Fight Back Fund is the largest yet in the assessor’s race. It occurred after Steele — who is president of the Metropolitan Water Reclamation District of Greater Chicago — lent herself $100,001, a move designed to break the state-mandated caps for campaign donations.

The Fight Back Fund is affiliated with the Local 150 International Union of Operating Engineers, a union that benefits from building and development. Many in the county’s real estate industry are opposing Kaegi for what they say are unfairly high and business-quashing commercial valuations of property. Kaegi maintains he is simply evening the playing field following years of mismanagement and misguided assessments of properties that hurt lower- and middle-class families.

Steele has garnered other union support in her bid to unseat Kaegi. In April, the Chicago Federation of Labor endorsed Steele, bucking the Cook County Democratic Party’s support of Kaegi even though the federation is usually close with the party.

“I’m fortunate to have a broad base of support from people who want to see a change in the failed status quo that is damaging our economy and the taxpayers of Cook County,” Steele said in a statement. “Working families have chosen to support my campaign because they understand how carelessly my opponent is managing the finances of Cook County residents.”

In his own campaign statement, Kaegi shot back that Steele’s supporters are supporting the “old way of doing business” to benefit corporate landlords.

“Every nickel of that money aims to undo our reforms that made the system fairer for homeowners and small businesses,” Kaegi said. “We know why my opponent and her allies are coming after me — it’s because I’m fighting to end a corrupt property tax racket that benefited political insiders and made the rich richer for too long.”

In the latest quarter that ended on March 31, Kaegi reported about $874,200 in cash on hand while Steele had about $107,100, according to state records. Since then, Kaegi has pulled in about $25,200 and Steele about $1.1 million, though all but $14,000 came from the loan from herself and the Fight Back Fund contribution.

Also on Wednesday, Kaegi’s campaign released the first TV ad of the race, depicting a hot dog receiving a generous squirt of ketchup — a divisive sight in Chicago — as a symbol of the tenure of his predecessors. He does not mention Steele in the commercial.

“Corrupt politicians shifted the tax burden away from wealthy downtown landlords on to middle-class families, drenching you with sky-high property taxes,” Kaegi said. “As a Democrat, that left a bad taste in my mouth.”

The ketchup-less Chicago-style hot dog, meanwhile, flashes on the screen in an attempt to show what Kaegi describes as “reforming the system.”